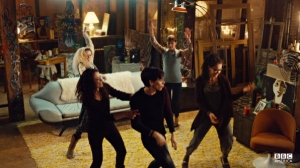 Not only are the Sestras of Team Leda my personal trainers, but also, as a result, I can survive car crashes, get stabbed through the side with rebar, run, fight, shoot with accuracy, and dig a grave through a cement floor. Impressed?

Don’t be. I may be exaggerating. Let me back up a bit.

During the summer of 2013, I lost about eighteen pounds. This happened through a combination of hopping up and down on an elliptical machine at Planet Fitness, and eating mostly blueberries and almonds in order to win the respect of  [popular Philadelphia actor and local vegan] Doug Greene. It was fun, for a while. Then,
a) I learned that Doug Greene’s kindness is so vast that he really doesn’t care if I eat things which can not be easily foraged, and

b) The televisions at my local Planet Fitness succeeded in driving me out of there. That’s right. The terrorists’ televisions won.

Here’s the battle. I had a pretty good system for making regular exercise part of my life. Roll out of bed, pull on the pile of work out clothes I thoughtfully placed [okay, dumped] on the floor next to the bed the day before, put earbuds in ears, and with my gym only a few blocks away, I’d be at the gym and on the elliptical, chugging along to “Doctorin’ The Tardis,” before I really woke up. 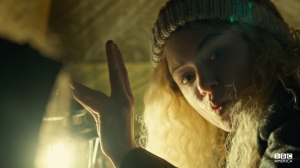 Unfortunately, the Wall Of Televisions across from the elliptical machines were extremely distracting. The morning parade of anorexics, invented health scares, and celebrity bullshit which passes for news drove me far away from sense and sensibility. One day I saw Olivia Wilde, being interviewed about her role in a movie in which her character allegedly liked to drink a lot of beer. I thought, she doesn’t look like she’s ever touched a beer in her life. She’s as light and luminous as a snowflake. She probably eats nothing but organic arugula and pure mountain spring water. Then, some weird part of me thought, you could look like that if you ate only twelve handfuls of almonds a day. It’s possible. And just look how much better her career is than yours.

Fortunately, some reasonable part of my brain (the part that likes eating, moving around and having cognitive function) said, NOPE, that’s not a healthy mind set. I got my priorities in order. After that, the televisions at the gym made me so angry, that I stopped going to the gym. Music wasn’t enough to keep me going, with TV flashing and flickering away in front of me. 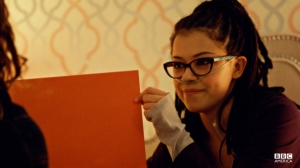 Recently, I was talking with some friends about how I wanted to write a Tv drama spec script for my portfolio. My co-worker Kevin suggested that Orphan Black might fit my sensibilities. I hate sitting and spending copious amounts of time staring at something without doing something else along with it, so I thought, I’ll watch it at the gym. I bought the iTunes season pass for the first two seasons, and away I went on Leda’s Big Adventure.

This show is absolutely ideal as a companion for cardio, especially if you’re stuck indoors at one spot*. Its style, as a one-hour adventure-sci-fi-drama- is ideal for a 45-minute workout. 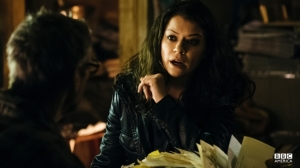 TV writing is formulaic, even for a genre-defying show like Orphan Black. Dan Harmon’s narrative structure method shows this formula best. Essentially, with a 40-45 minute show, you’re going to have moments of tension every five or six minutes. Every other moment of tension will be a major moment of tension, and they will increase in intensity throughout the story.

To try to make things simple, these are your big turning points of story.
1) A person is in a place of comfort
2) But they want something
3) They enter an unfamiliar situation
4) Adapt to it
5) Get what they thought they wanted
6) Pay a heavy price
7) Return to where they started
8) Having Changed.

In the case of a serial thriller like Orphan Black, you’re not going right back to the beginning, necessarily, you’re only back to square one in the sense that you’re still fighting The Bad Guys. Your favorite clone makes progress, but not enough for her to win freedom for herself and her family.

So, when you’re working out, these points of tension will make you move faster. The first ten minutes or so, even if they start with Sarah or Cosima or Allison or Helena in a major pickle, are at least a pickle with which the viewer is familiar. The episode is establishing itself, and this gives you time to get warmed up. After about ten minutes, our heroine gets presented with a new difficulty, and that makes the tension pick up. Usually, by about fifteen minutes into the episode, there’s a bar fight, a critical code to be cracked, or a chase that makes the viewer more tense. So, the natural response is to do what? Move faster. Each conflict increases the tension, leading to a plateau, and then another increase, until the inevitable cliffhanger ending, which leaves the viewer wanting more. 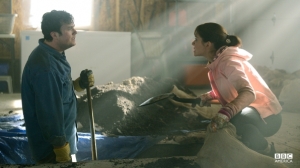 Mirror Neurons being what they are, we can’t not get tense along with our favorite characters. Every time they get into trouble, we do what they know they should do; tense up, and run, or fight. It’s a perfect thing to keep you going when you’re at the gym. There are some exceptions, however. When Paul pressed the stolen (spoiler object) into the palm of Felix’s hand, I hauled on the brakes on the elliptical foot pads so hard that I almost fell off of the machine. So, be careful. This show is not to be taken lightly.

It’s true that many television shows follow this formula, and probably any one-hour drama or police procedural could fit the bill. Why not just go to the gym a couple of hours after dinnertime, and catch one of the many variations on CSI or Law & Order? Because this is Orphan Black, and it’s a whole new modus operandi in story.

One actress, Tatiana Maslany, plays the main characters, all of whom share the same DNA, but are as different as chalk and cheese. Each of them has secrets, and has to pretend to be something she’s not. Anyone who wants transformation, or has just had a very bad day (why else would you get on an elliptical machine?) can empathize with Clone Club. The clones battle and support each other in similar but unique voices, much as different facets of one human’s personality. Yet they all work toward a common goal; independence and safety for themselves and their family. Because one actress plays all the roles, the viewer gets pulled into the concept of transformation. The body becomes immaterial; what matters is the clones’ desires, actions, and manners of self-expression. For someone who’s trying to get more exercise, this hits home. Ultimately, the premise of Orphan Black is, “Is biology destiny?” Is our body all we are, or can be? For all women, we want to feel like our bodies are less important than our personalities, thoughts, and desires. In the case of Orphan Black, the human body is a part of oneself, but not the entire existence. 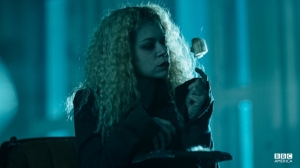 Having this show accompany me as I work out makes me more excited to go to the gym. It makes me think about the body in terms of strength, health and autonomy. It distracts me from all of the usual chatter in which we engage, concerning fitness and working out. Maybe I’m not doing this because I want to look like the women on The Today Show or Good Morning America. Maybe I’m doing this in case I ever have to dodge a sniper’s bullet or run for my life or fight off a bunch of armed goons. The characters on this show are flexible but tough, capable of change, but focused, and always moving up. It’s the best workout companion I’ve ever had.

I have not yet seen Season 3, other than the occasional trailer or sneak peek. Like I said, I don’t have cable (although Episode 1 of Season 3 is available online. BUT FOR HOW LONG???). As far as I can tell, some of what the new season concerns is how big business (i.e., Dyad), can control the human body, how the government and military can get involved (such as in the case of copyright), and what people can do with their bodies. These ideas scares me, particularly since we see this all the time. We see it when women starve themselves to fit a business’ idea of what a clothing size is, when people make choices about food, self-care, residence or birth control based on what corporations say is safe and healthy. I’m glad this show is exploring these ideas, in an interesting and inventive way.

And no, I never wrote the spec script, because I was too busy being in love with the show. I probably will eventually, anyway. Wide Open Spaces made the semi-finalist level for the National Playwrights’ Conference at The Eugene O’Neill Theatre Center, so I can’t possibly be that bad at this whole thing, right?

Lindsay is a playwright, arts advocate, and a candidate in Temple University's MFA program in Playwriting. She lives and writes in Philadelphia, PA, with her husband and a small menagerie. Someday, she hopes to not have to vacuum. View more posts