Some years ago, Maya Angelou gave the commencement address at the University of Delaware, where I was an (itinerant) undergraduate.  That year, many of my friends were graduating, so I wanted to attend the giant commencement ceremony to see them, but getting to hear Maya Angelou speak was A Very Big Deal. 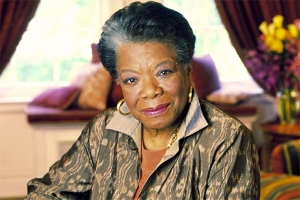 I Know Why The Caged Bird Sings had been in my English curriculum at Westtown, so I felt a really strong pull toward her. I had also had the extremely rare pleasure of hearing Coretta Scott King speak when I was young, and had a sense of the weight of history on both of these women.  So, I was extremely curious to know what Dr. Angelou would have to say to a football stadium full of mostly white, fairly privileged young people, when her career had included not only teaching and journalism in Ghana and Egypt, but also acting, singing, and working as a fry cook and a prostitute.

I can’t remember her entire speech, word for word, obviously, but one concept stood out for me most. She said that every single person there had achieved what they had today, because someone else had “been a rainbow” for them; given them a hand, a leg up,  written them a letter of recommendation, offered a second or third chance,  paid a bill or packed a lunch. She said that because of this, it was now their responsibility to “be a rainbow” for someone else, and pay that help forward.

Lindsay is a playwright, arts advocate, and a candidate in Temple University's MFA program in Playwriting. She lives and writes in Philadelphia, PA, with her husband and a small menagerie. Someday, she hopes to not have to vacuum. View more posts

One thought on “Maya Angelou and The Rainbow Connection”