Recently I was introduced to the Tumblr, whatshouldwecallplaywrights.tumblr.com, which made me laugh so hard that my core muscles ached, and I have to thank its creators for giving me a workout.  If you are not a playwright, you’ll find it funny, at least for the pop-culture references. if you are any kind of a writer, especially a playwright, you will find it painfully funny, with an emphasis on pain.

As I was dragged into its web, my experience went from gleeful to sad, and then I moped around like a loser with my chin in my chest. The Tumblr talks about things like “when i have a reading and…” or “when I have an audition and…” or “when I have rehearsal, and…” and I haven’t had the “actively making theater with other live human beings in the same room” experience for a long time. 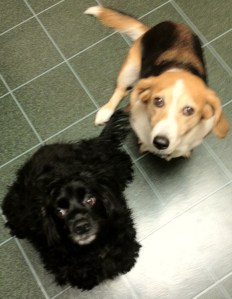 Confession: I have spent my summer chin-deep in new work in progress. This always sounds so exciting, like I’m conjuring glowing dancing fairies out of the palm of my hand while hapsichord music plays in the background. In reality (I have no talent for making animated gifs, so I won’t submit this to them), I have been typing, scribbling, talking to myself, and having fights with junk food. I read scenes out loud to the dogs.  Squeaky was particularly excited about the scene that involved knocking on a door.

Then, my inner smart playwright said, that’s it, I’m turning the car around. People won’t know that you write plays that are good and so on and so forth unless you have a public writing platform type thing, so do what you know you need to do. Back to the blog with you, Nessie.

Hello. I’m back in the game.

Other than the work-in-progress (It’s fine. I’ll let you know when it wants to be known about), here are some other things that I enjoyed this summer.

Sleep No More. I was introduced to this by my dear friend Jennifer, who organized a trip for a bunch of us to go up to New York to see it. I had attended immersive theater experiences before, such as Pig Iron’s Pay Up, and have a deep, abiding love for site-specific theatre. Creating Mixed Drinks at O’Neal’s Pub in 2003 was one of my life peak experiences. I love being inspired by a space to create a piece that works in it, and I love complicated relationships between artists and audience. Sleep No More does not disappoint in any way, shape or form.  More than that, it gets under your skin and becomes something you can’t stop thinking about. When you meet other people who have seen it, it’s like being members of the same secret religion, and you curtail yourself off to talk in hushed tones, “Did you…?” It’s a theater experience that is incredibly real, changes based on the audience, and makes you re-think about how you exist in space and power relationships with others.

All this praise being said, I feel like I did Sleep No More wrong. I followed all the rules, particularly the most stern commandment, “Fortune favors the bold,” but I seemed to always be walking into a room just as a pivotal scene was ending and the actors were leaving. Or I would find a room where a character was having a private moment outside of the main plot. The experience I had was beautiful, inspiring, intricately woven, and emotionally intense, but afterwards I found out that one of the people in our group had managed to follow one of the actors like a hawk through the entire show, and had gotten a full, cohesive plot out of her experience that differed completely from mine.

If I had to trade that for the things I did see, I wouldn’t. I found a mirror in a bedroom that reflected back everything in the room, except for me standing in front of it. I found spells scratched into the bottom of a drawer and read patient records on hospital bedstands.  I found a room plastered from floor to ceiling with pictures of birds. I never found the apothecary’s “pills” that everyone talks about.   I witnessed passionate, acrobatic scenes between all the side characters with their own secret stories, but I didn’t see anything involving the power couple until the banquet scene. It whets my appetite to go back, find what I missed, and learn more about how to create this kind of theatre.

Unfortunately, for someone like me, it is expensive. By the time I paid for the ticket, handling fee and transportation, I had spent myself dry for the week. I might end up turning tricks to pay for my Sleep No More habit.

The Starlux. Vince and I don’t get out much when it’s not one of his gigs, so a long weekend in Wildwood was a big deal for us.  Vince used to spend his childhood summers there, so he was good at navigating, and I pretty much just rode along.  If you want the simple, relaxed Jersey Shore experience, with a certain amount of quiet and a certain amount of excitement, The Starlux is your best bet. It’s two blocks from the boardwalk, near the convention center, so there’s just enough convenience if Morey’s Piers and the boardwalk bustle are your thing, and just enough distance if you want quiet.  Separate from the main building are two lovely remodeled Airstream trailers, and we stayed in the one pictured here.  I fell in love with it very quickly.

Pros: A deck you share with one other trailer, with tables and a grill. With the air conditioner, it’s quiet enough that you will never hear the traffic (unless a Really Loud Motorcycle goes by, and that was infrequent).  The decor is pretty, with clean cool colors and sweeping lines reminiscent of the movie Sleeper, it’s very comfortable, and the mini-fridge and microwave make everything very convenient. The service at the Starlux is outstanding. Everyone is remarkably, genuinely friendly and does everything they can to make your stay pleasant.

Cons: If you are six foot four or taller, you may want to get one of their regular rooms or a suite instead. Vince fit inside, but didn’t stand up much. Had I been as, shall we say, girthsome, as I was in 98 or so, this would not have been a fun time. We were at close enough quarters that this would just be very uncomfortable for people who aren’t happy with seeing each other naked or hearing each other fart.  That’s the Airstream experience, they’re small. Get with it.

We spent most of our time relaxing in their pool, eating well, and working our way through Juan Pablo’s margarita menu. The Starlux also has complimentary bicycles to borrow, so we were able to get in a few local bike rides. Also, I fell from 100 feet up in the air.  I can prove it.  I recommend this experience, mostly because it’s good to be comfortable with the feeling that you have when everything you think makes sense is so far away that it no longer makes sense, and you think, “Okay, so this is how I’m going to die.”  (And then, of course, you don’t die, but it doesn’t seem like it will be that way at the time.) Also, the view of the ocean is stunning and humbling. 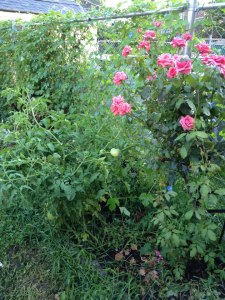 Gardening. I’m not much of a gardener. I go to Linvilla Orchards, I buy plants, I put their roots in the soil, and then I try to keep them from dying.  My only goal is to make a garden that looks like the complete and total antithesis of  all the neatly planted sterile gardens in our neighborhood. If it looks like Willy Wonka suddenly went from candy to plants, as far as I’m concerned, achievement unlocked.*

If you have ever tasted the difference between a home-grown, well-loved tomato, and the kind you buy in supermarkets, you can get a little nuts trying to make his happen at home. We have some tomato plants (some Better Boy and some Brandywine, which are an Amish heirloom variety), enough basil to make pesto occasionally,  a rose bush, and we have a lot of morning glories. The rose bush was nearly dead this past spring, but frequent watering and some compost has made it come back with a vengeance. One tomato, so far, has grown to the point of being red and ready to eat. The rest are taking their time. Daily watering gives us a meditative ritual for the day, it’s very peaceful and it feels productive.  Pulling weeds lets me get out a lot of aggression. And, speaking of getting out aggression… 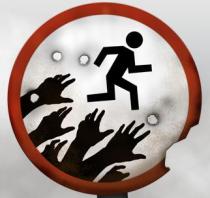 Zombies, Run! Six to Start briefly offered this game for $1.99 for one day only early this summer. William Mize recommended it, and I thought, if this gets me moving, it’s worth its usual $8 price tag.  It is a blast. The notion is that you go for a run, and the app does usual running record-keeping things that you want, such as pace and distance, but it also integrates a story with your music playlist. So, you’re not just running (or walking really fast, in my case). You are Runner 5, on a mission to get more supplies and food, unraveling a mystery as to what caused this post-apocalyptic adventure, and avoiding traveling packs of hungry zombies. So, as you run (or walk or cycle or whatever it is you do), not only does it switch between messages from the characters and songs in your playlist, but it lets you know when you’ve picked up useful items, like tinned food, a sports bra, or 9 millimeter bullets.  It also lets you know when a random zombie horde has been detected, and how far away they are.

One day, Squeaky and I were on a mission, and the game warned me that a zombie horde was right behind us, just as This Way To the Egress’ “Delicious Cabaret” spun up.  In the interest of avoiding traffic, I made a sharp turn down an alley we’d never taken, and sped up. Just as I thought, “I can’t do this,” not one but two big guard dogs decided to half-hop their fences, snarling and barking like I had pockets full of steak, that I’d stolen from their moms. I took off like a rocket. Squeaky was not amused.

The sad ending to my summer: On the same day that all my reading lists for next semester arrived, Amazon.com pronounced my Kindle dead.  Since it’s out of warranty, they  offered me a discounted, refurbished Kindle with “sponsored screensavers and supported content.”

So, basically, the Kindle died, and they offered to sell me a (refurbished) means to look at their advertising. If I’m paying for it, shouldn’t it be ad-free? If I’m looking at their ads, how can they charge me?  And if they can sell me a refurbished Kindle, why can’t they just refurbish my Kindle?

All I know is that I have 23 plays to read. If I have to read them on a backlit screen, that’s not good. Looks like I’m expanding my paper library this year, or I’m buying a new Kindle.  Bastards.

I’m less than a week away from a new semester in Temple’s MFA program, Vince’s band has gigs coming up, and the mint is knee-high, so please send bourbon.

*This should explain the presence of Gardenbike, our trellis for morning glories, daylilies and mint. I thought it was a Frankenbike. I was wrong. It’s a Gardenbike.